The original was made by skeleton K for Oblivion.  Credits to him. 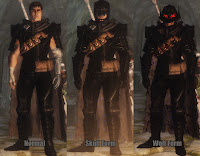 - Make it morpheable for skinny males (not a priority right now)

Version 2.1 Notes
- Fixed crash due to the plugin not finding the sound file in the BSA (fix that crap Bethesda!)


Version 2.0 Notes
- Made some sort of miniquest to get the enchanted version, you'll have to battle a Monster.
- Made replicas you can forge with Daedric smiting, this was asked a lot.
- Fixed the Skull Form not removing the Transform to Wolf Form power after its effect passed.
- Made the powers get auto-equipped when you put the base armor on.
- Made it so whenever one of the two transformations end, you get re-equipped whatever helmet and gauntlets you had in the first stage (SKSE needed).

As you can see in the screenshots, you equip the base "Berserker Cuirass" and "Berserker Boots", and you get a spell to transform it into the Skull form of the armor. When you transform into the Skull form, you get a last spell to transform into the last form, the Wolf form. Also, something you should have in mind, I made the skin of the base cuirass compatible with Zenl's Blackswordsman Armor's Iron Arm, so equipping anything but those for gauntlets will probably result in a huge gap at the left arm.

Some things I said I'd do with v2 I didn't, but at least I included a little surprise. To get the enchanted version of the armor, you'll have to battle a Monster. I also added replicas of the armor. This just means they don't have the ridiculous buffs of the enchanted version nor do they transform between forms, but they can be crafted provided you have the Daedric Smiting perk.

About the script sources: They're there. You're free to check them, you'll just have to get them out of the BSA.

-First, thanks to skeleton K for his great armor. I just ported it to Skyrim and made some extra stuff for it.
- A lot of thanks to 「大麻の女神」 who helped me a lot with the necessary scripting for the armor and to make it possible. He also helped me with the magic settings and all that stuff, since I had no idea how it worked.
- A lot of thanks also to the guys from the Skyrim Creation Kit (CKPublic) Steam group, they helped me a lot with the scripting I had to do for the miniquest.
Posted by Bagserk at 7:58 PM